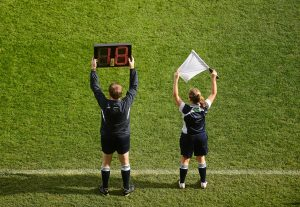 Fourth Official 482. There shall be one fourth official, where required. S/he may be appointed by the County Board, Provincial or Central Council or their sub-committees.

The role of the Fourth Official

483. The Fourth Official duties shall be:

(f) Keep the side-line clear from any unauthorised personnel