You are here: Home / club_note 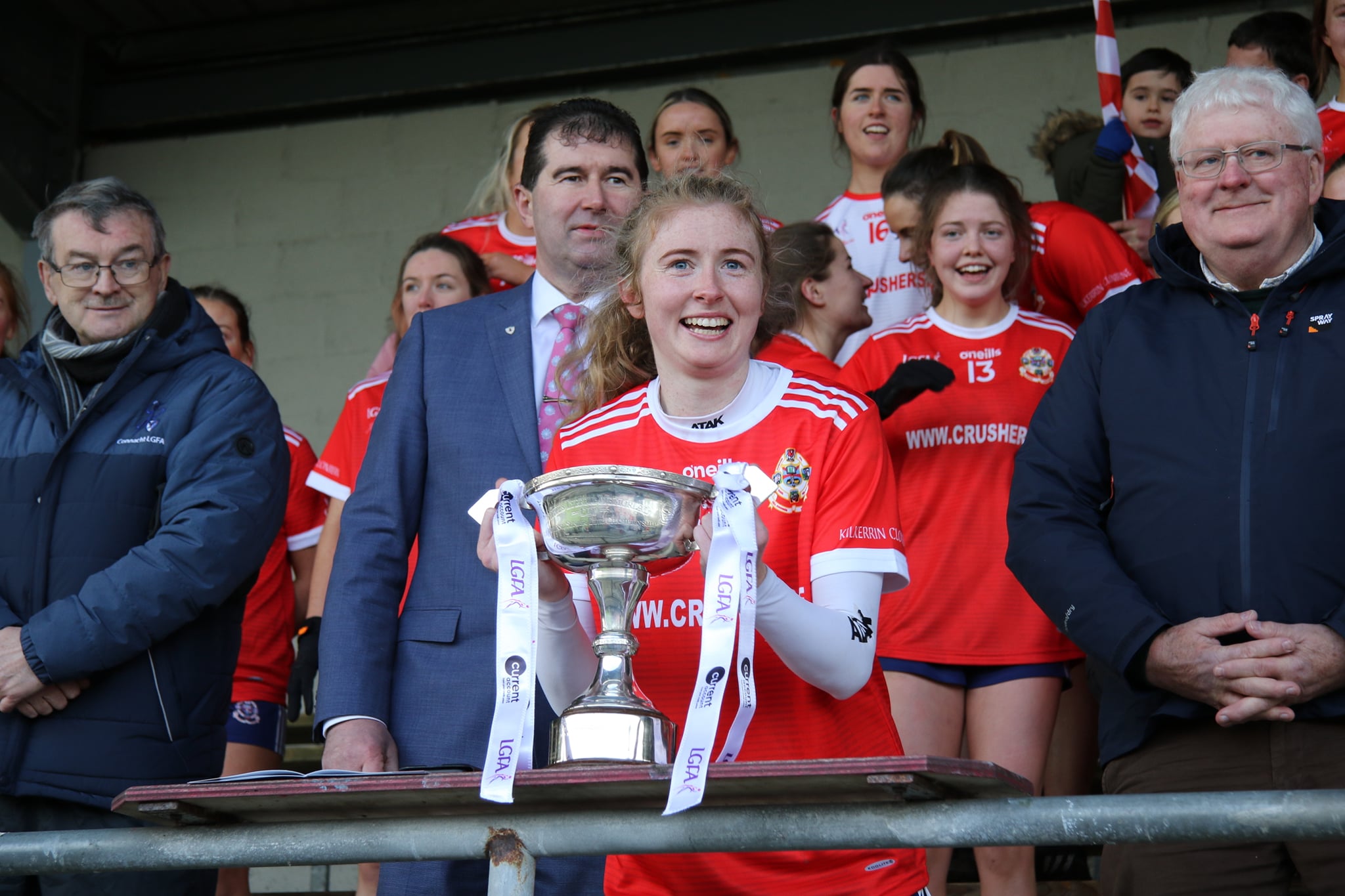 Kilkerrin-Clonberne win their first ever currentaccount.ie All-Ireland Senior club title following a stunning four-point win over Mourneabbey in St Brendan’s Park, Birr.The Connacht champions are also the first team from Galway to get their hands on the Dolores Tyrell Cup since Galway Gaels in 1982.Chloe Miskell’s 12th minute wonder goal gave them a lead they never relinquished and scores from Olivia Divilly, Louise Ward and Eva Noone helped avenge the heartache of defeat to the same opponents in 2019.

Doireann O’Sullivan opened the scoring for the reigning champions from a free on five minutes before a foul on Ailish Morrissey resulted in Eva Noone hitting the target.

But the game came to life in the 12th minute when Louise Ward, Lynsey Noone and Morrissey combined to allow Miskell score with a rocket of a shot past Meabh O’Sullivan, for Kilkerrin-Clonberne’s goal.

Doireann O’Sullivan responded from a free but the Galway club were in the ascendancy. Olivia Divilly and Morrissey scored before Nicola Ward sliced through the heart of the defence and added another point.

Ciara O’Sullivan was taken down for a Mourneabbey penalty just before half-time. Laura Fitzgerald scored the goal for the sixth consecutive game and left the Cork side just 1-6 to 1-4 down at half-time.

An Olivia Divilly point gave Kilkerrin-Clonberne a 1-8 to 1-6 advantage at the last water break and they pushed on after the resumption as Olivia Divilly again, and Louise Ward, put four between them.

Ciara O’Sullivan responded with Mourneabbey’s only point from play but the second goal they needed never materialised and they finished with 13 players as Niamh and Doireann O’Sullivan picked up late yellow cards.

Eva Noone had the final say, where she finished a move involving Nicola and Louise Ward to restore Kilkerrin-Clonberne’s four-point cushion, and ensure they were crowned champions.

Scroll to top
We use cookies on our website to give you the most relevant experience by remembering your preferences and repeat visits. By clicking “Accept All”, you consent to the use of ALL the cookies. However, you may visit "Cookie Settings" to provide a controlled consent.
Cookie SettingsAccept All
Manage consent

This website uses cookies to improve your experience while you navigate through the website. Out of these, the cookies that are categorized as necessary are stored on your browser as they are essential for the working of basic functionalities of the website. We also use third-party cookies that help us analyze and understand how you use this website. These cookies will be stored in your browser only with your consent. You also have the option to opt-out of these cookies. But opting out of some of these cookies may affect your browsing experience.
Necessary Always Enabled
Necessary cookies are absolutely essential for the website to function properly. These cookies ensure basic functionalities and security features of the website, anonymously.
Functional
Functional cookies help to perform certain functionalities like sharing the content of the website on social media platforms, collect feedbacks, and other third-party features.
Performance
Performance cookies are used to understand and analyze the key performance indexes of the website which helps in delivering a better user experience for the visitors.
Analytics
Analytical cookies are used to understand how visitors interact with the website. These cookies help provide information on metrics the number of visitors, bounce rate, traffic source, etc.
Advertisement
Advertisement cookies are used to provide visitors with relevant ads and marketing campaigns. These cookies track visitors across websites and collect information to provide customized ads.
Others
Other uncategorized cookies are those that are being analyzed and have not been classified into a category as yet.
SAVE & ACCEPT
Powered by